Here are the three hits I pulled from the blog-posted 2009 UD Series 1 box, my second box out of three to open.

This is the last pack of this box and I am pretty stoked with this box. I pulled a payload bay liner card and a payload bay blanket card. The only card left that I really want is a Spacelab wiring card and I have one more box left to try to pull it before I have to go win one at auction.
Posted by Two Packs A Day at 10:14 AM No comments:

75 Helen Keller - humanitarian
82 George Marshall - diplomat
105 "I only regret that I have but one life to give my country"
117 Battle of Midway
89 John Quincy Adams - diplomat
17 Charles Weltner - political hero
Medal of Freedom - Frank Robinson
Heroes of Sport - Ty Cobb
Posted by Two Packs A Day at 6:52 AM No comments:

Yesterday's 2010 Topps pack was the final one of that box, so I'm starting a box of 2009 Bowman Draft Picks today. This is the first box of BDP that I've ever opened, historically opting to purchase complete hand-collated sets rather than build the set from packs. It should be intersting to see if I like opening this box and might build future sets from boxes or just go back to buying sets.

I found a few images that I haven't yet posted to the blog of some of the various hits from boxes I've opened in the past, so I'll start posting them with the 2009 Topps Ticket To Stardom box hits. 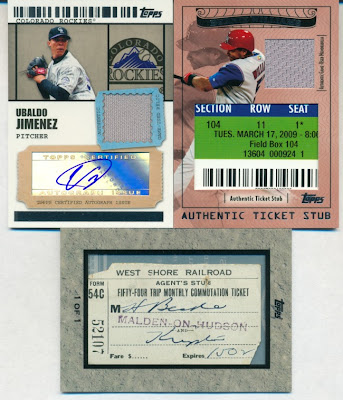